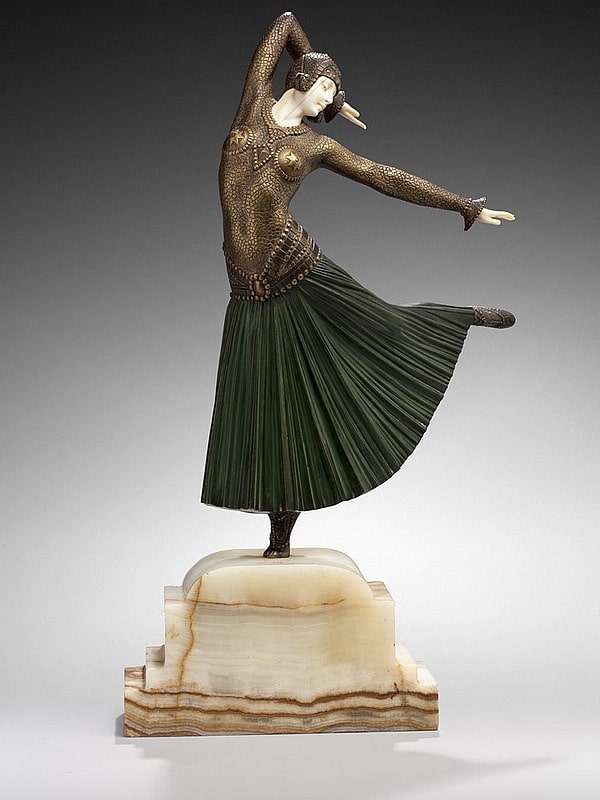 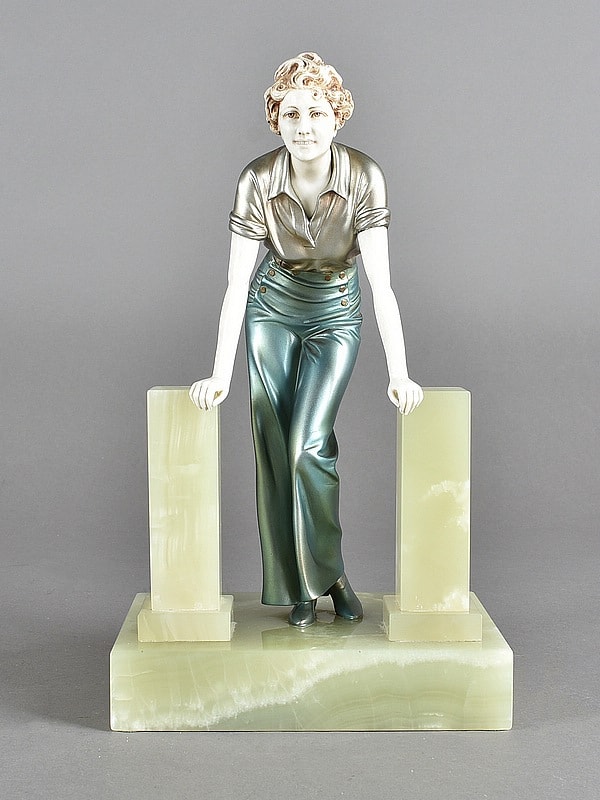 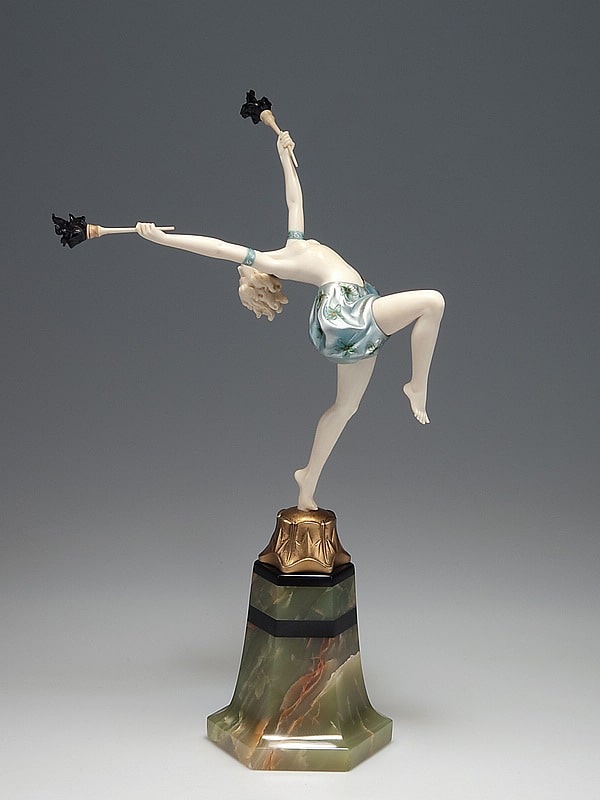 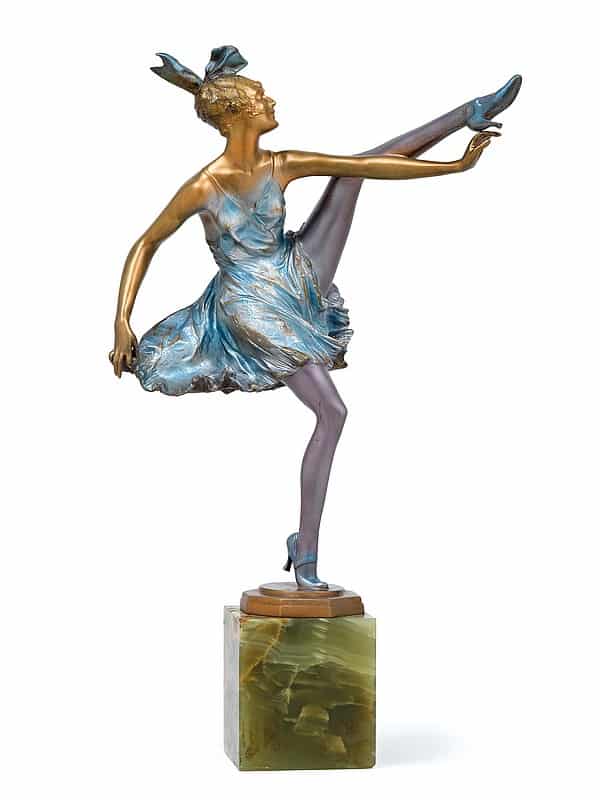 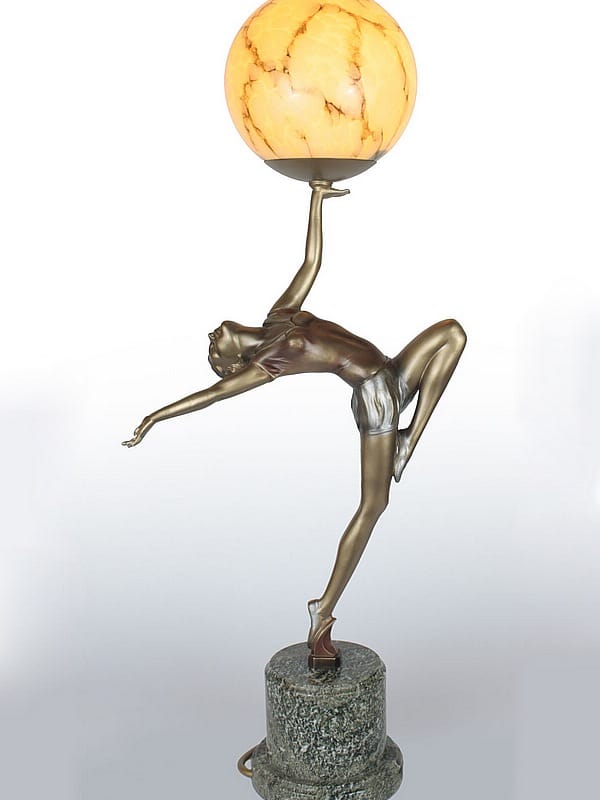 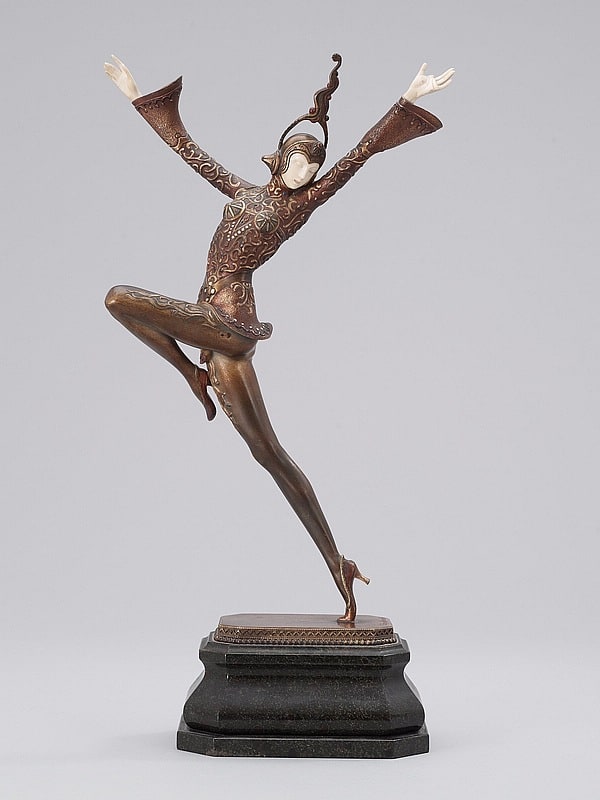 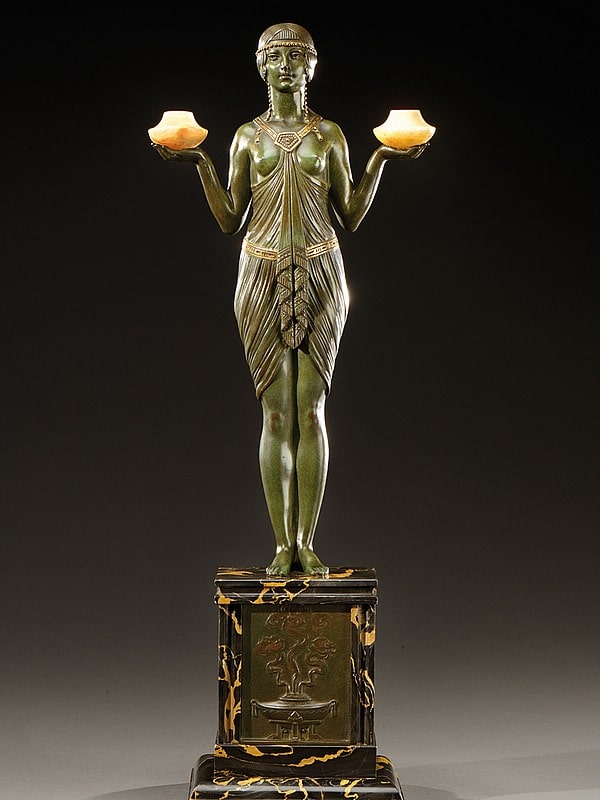 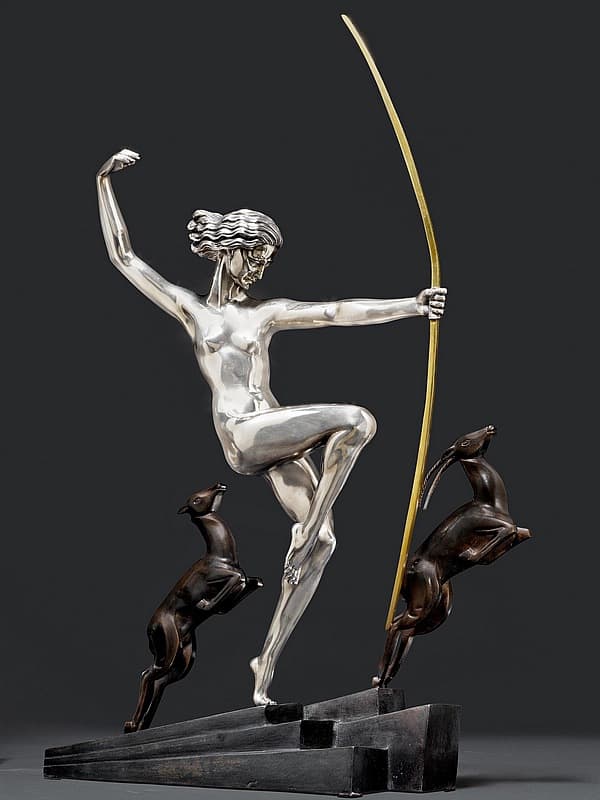 These small-scale figurines that conjure up images of cocktails and flappers, wild jazz music, Hollywood and divine decadence and seem frozen in time, created by now famous sculptors such as Demetre Chiparus, Ferdinand Preiss, Josef Lorenzl, Bruno Zach and Claire Colinet. Taking their inspiration from the dancers, cabaret performers, movie stars and fashion in Hollywood, Paris and Berlin at that time these sculptors produced works that perfectly capture the spirit and energy of the period between the wars.


These decorative bronze figurines were produced in France, Germany and Austria and painted with enamel paints and lacquer, with the more expensive examples having heads and limbs of carved ivory. Produced for home decoration in the 1920s and 1930s and originally for sale in jewellers and department stores they were often given as wedding presents and presentation gifts. Often they were custom-made in coloured finishes to match the customer's room decoration and tips were given on how to display the figures for maximum effect in illuminated niches. Hence examples (especially by Ferdinand Preiss) can be found on many different coloured marble and onyx bases, mounted on clocks and turned into lamps.


Inevitably the success of these figurines led to cheaper alternatives created for those who didn't have the means to buy the chryselephantine figures but desired the look. So one can find examples of large French figurative groups (often signed Menneville) made of spelter (a zinc based metal) combined with an imitation ivory known as ivorine that give the look (but not the quality) of the large bronze and ivory groups by Chiparus. Germany also produced spelter and ivorine figurines but these are much smaller in size. There were also many examples of figurines made solely of spelter and coloured with metallic enamels; once again the larger examples are usually French and mounted on often extravagant marble bases with the German (and Austrian) examples being much smaller and usually mounted on alabaster rather than the more expensive marble and onyx.


Germany also produced many quality Art Deco figure "lady" lamps made of spelter which are decorated with gold and silver lacquers and holding globes, the glass crackled, “marbled” or more rarely internally hand decorated to resemble alabaster. These lamps (often "inspired" by the French lamps of Max Le Verrier and bronzes by Lorenzl and Preiss) seem to have been very popular in the UK (examples can be found in department store catalogues from the 1930s). The more often than not naked young ladies were mounted on shaped granite or alabaster bases, holding aloft their illuminated globes until the glass got broken or they were no longer considered fashionable (or appropriate!) and were banished to a cupboard or put into storage.


Derided by snobby critics at the time as being nothing more than “decoration” Art Deco sculptures fell into disrepute and it wasn't until the mid 1970s that they began to be taken seriously as small scale works of art with the more important bronzes and sculptors being included in sales of Art Deco and Nouveau by the major auction houses. Consequently all Art Deco figurines whether they were made of bronze, spelter or ceramic were rediscovered and since then these stylish sculptures have once again been adding a touch of Art Deco glamour to homes all around the world...© Craig - 20th Century Decorative Arts.